If you ask us why we put Amsterdam on the itinerary, there are no two answers for that one. We really wanted to have those wicked space cakes! We researched to no end to find the right place and the rest, as the phrase goes, was ‘Legen – wait for it- dary’ in true Barney Stinson style! I guess that’s how one says amazing nowadays! 😉

There was a bit of rain as we entered Amsterdam. We stayed at the Flying Pig Downtown hostel. If you ever go there, we definitely recommend the place. It was not that inviting, that it makes you want to stay in all the time. But, it was comfy enough to sleep like a log in the night. The hostel had a very Amsterdam-ish feel to it. Red decor, well located and a lounge full of doped out people. The free breakfast was very nice too!

The first day in Amsterdam was spent in locating the Tweede Kamer coffee shop. (Note – All coffee shops in Amsterdam sell more than just coffee). I think we spent over an hour going round in circles from one canal to another. From one bylane to another. It is a very small shop in an obscure lane pretty near to the City Centre. But all the walking was completely worth it! So, like good kids, we ordered three space cakes and three mugs of hot chocolate. We were forewarned to not move around after eating that. Now this cake looks harmless (barring the packet in which the cake is packed which is full of instructions and dire warnings!). Just like the one you bake at home. Tastes like that too. So we ate, smirked at the (very wise) coffee shop guy and moved on. 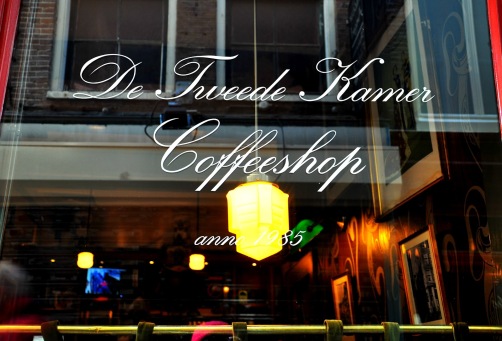 You know there are those times, when on hindsight all you want to do is go down on your knees and say ‘Thank you God!’. Well, the hours spent after eating that cake could definitely qualify as one of those moments. Anyway, to cut a very long story short, we got really really stoned and really really lost! Really really scared too. Yes I am deliberately repeating the word ‘really’. If not for a sober friend who came from Utrecht to meet us, am pretty sure I wouldn’t have had a Euro Trip to write about! So, after what seemed like hours and hours (actually was 45 minutes) of walking all over the town (actually just from the shop to the hostel), the said friend safely dropped us back to the hostel. While S and Robin were out like a light, I actually managed a diary entry in a very questionable font.

18th September, Post Tweede Kamers – Everything’s slowed down. Ears have gone fuzzy. These two kids have passed out. Hungry but no food around.

I think I walked an infinite distance today. At one point, I thought we were lost. When stoned, getting lost is a very frightening thought. ONE space cake did us in! Staring into space now. Sleepy too!

As is evident, I state useless and boring facts when stoned. And wake up early?! I never sleep with that thought! So, 14 long hours were spent sleeping our way out of the space cake effects. The next day was a very touristy day. We started with Anne Frank’s House. That place can sure give you the chills. For ignoramus, Anne Frank was this young Jewish girl whose family hid from Germans in this small annex in her father’s office for two years during World War II. They finally got caught and were sent to concentration camps. Her diary is possibly one of the most famous books from those times.

19th September, Anne Frank’s House – The annexe is so small and dark, the thought of being locked there for two years is quite scary. Otto Frank in an interview much later says that even for him, who was in very good terms with his daughter, Anne….the diary was a complete revelation of who she actually was. Parents mostly don’t know their children well. True to quite an extent I guess.

Made a mental note of doing a trip to places like Warsaw, Auschwitz. It’s not a deliberate attempt to inflict myself with horror stories, but sometimes places like these give you humility. Also, a sense of gratitude for all that we have and take for granted every day!

We had half a day more and the sun was warming up our very souls! So we decided to just walk around the town.

20th September, On my way to Paris – Amsterdam is done. It’s the city of graffiti, canals and coffee shops! And a whole lot of stoned people. It’s a small city with cobbled streets everywhere! Wherever we had to go, we just walked. Walked all the way to Leidzeplein, then to Van Gogh museum and then to Vondelpark. Clicked a whole lot of lame pictures and became happy about it. Camera has become an indispensable companion!

Red light district was overrated. Live sex shows and weirdly dressed extremely artificial women all around. A walk through those lanes was enough to creep us out.

On a different note, Dutch pancakes are awesome! We had chocolate ones and apple cinnamon ones with whipped cream. Yum! Weight is just a number after all! And for the record, S has sworn off all things high and smoky! 😀

The city with its winding canals is pretty as a picture! The small lanes with its overbearing smell of marijuana..if you look beyond the smoke and haze..is full of eclectic shops and people from all over the world!

Two hours to reach Brussels. As far as the Euro Trip is concerned, so far so good! Loving the freedom and the intent to only travel. No work and no stress. Missing everyone back home though.

We did pick up souvenirs from Tweede Kamers for the rest of the trip, if you know what I mean. 😛 Even if you don’t have an intent like ours, I’d say visit this city! It’s beautiful and worth a cycle ride! We were too dazed to trust ourselves on cycles the second day, but it’s a must-do here. We also missed going to Albert Culyp market, which apparently is one of the world’s biggest flea markets! Anyway, those were two very idyllic days spent in Amsterdam. Next stop was Paris (with Pallavi!).

Forgot to add – Got an uber cool leather jacket from Zara’s. So much for budget trips and abstaining from shopping! All I need now is a pillion seat on an Enfield!