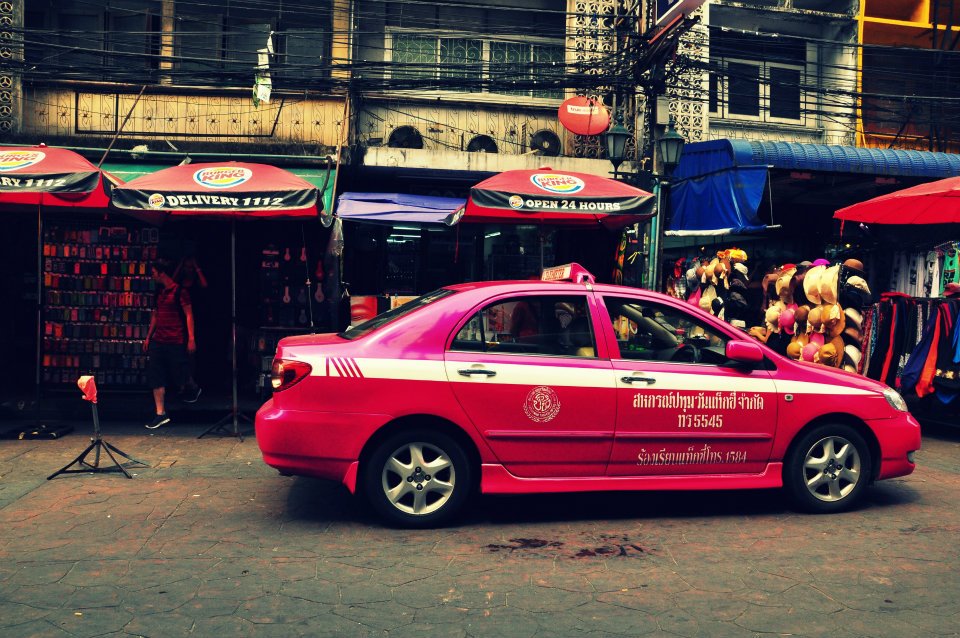 Post Europe, we had a travel itch. It’s the worst kind of itch. The kind where you can’t concentrate on anything! Office walls make you feel murderous and day dreaming is often the only balm. The first month after Europe was spent reliving all that we did there and going through photographs ad infinitum. There were stories to tell and duty free stuff to finish. And some breath to catch, after all the incessant travel. Once the suitcases were unpacked, the laundry was done and mundane daily routine set in, that’s when the travel itch started. This time it had to be Thailand. Not the usual get-drunk-party-all-the-time Thailand, but the beach hopper’s paradise Thailand. This was our route –

We took the night flight from Chennai to Bangkok. Have I mentioned this before how bad an idea these night flights are!

Bangkok from the air looks a whole lot different than Indian cities. Lights seem symmetrically aligned in squares and rectangles. Random things that I make a note of! 😛 So, we dragged our feet to immigration. 1000 Bahts for regular and 1200 Bahts for express processing. The good thing about reaching at an odd hour was that there was barely any rush. So, we went ahead with the regular queue. It is a good idea to keep 1000 Baht handy before you fly from your origin country. But, just in case you don’t, there are money exchangers right before the immigration. Just keep your money in dollars/Euros to get a good exchange rate. INR will just about rob you out of your senses. 😀

We were booked in the Niras Bankoc hostel in Bangkok. Hard to locate the street it is on, but such a find! Very Thai feel to the place, a cozy coffee shop downstairs (where they serve beer too), very very steep stairs (as is true for most Thai buildings), bunk beds, a common room with a TV and many DVDs and not to forget, extremely well located. We took the skytrain from the airport to Phrayathai (the last station I think) and then haggled with a tuk-tuk to reach the hostel. Skytrain is a blessing (45 Bahts per head) and the tuk-tuks are such a menace! They made my Chennai auto drivers look like docile Indian brides! Our first trip glitch happened the moment we reached the hostel – none of our cards worked! Just one of those days. Only way out was to wait for Panny, who was due in a few hours. The eager beavers that we are, irrespective of the financial crisis, we dumped our luggage and went to Khao San road for lunch and more fluid pursuits.

For ignoramus, Khao San road is not to be missed in Bangkok! Shopping central in the day and a party hub in the night. Not the club sort of a party, but the kind where the entire street throbs with music and liquor and energy! Happiness levels are unbelievably high here. More on that later. So, lunch at Khao San was from one of the many Pad Thai stalls on the street. Excellent and absolute value for money. We had pad thai + egg + shrimp for all of 50 Bahts. S did complain about it being fishy. Literally! That was followed by Chang beer – the KF equivalent of Thailand. Only, so much better!

Panny reached, we were bailed out and all set to make the most of the bare minimum time we had in the city.  Bangkok is a 100 Gurgaons put together. Skyscrapers after skyscrapers, with an odd Thai building thrown in for good measure. Malls in every direction. Traffic jams. Pink cabs and tuk-tuks zipping by at breakneck speeds. We had absolutely no intentions of entering those run-of-the-mill malls. Instead, we went to this weekend flea market called Chatuchak or JJ market. Thousands of stalls selling local food, clothes and Thai local handmade stuff. We saw nothing of the kind in entire Thailand. Absolutely recommended for picking up souvenirs. The only low is that you barely have any scope to haggle. Probably, being the foreigner in a local market is a small reason. But, the prices are reasonable and the stuff, really really good. Just go early and go with a lot of patience. Don’t forget to eat chicken skewers right outside! And the Shawarma too.

Post all the shopping, it was time for all the quintessential drinking. You got to start a trip in style after all! 🙂 So, we again headed to Khao San road. Like I had mentioned before, the road transforms completely in the night! There were speakers blaring all sorts of music. People selling alcohol in every form on the roadside. Chairs spread out by the sides of the street for foot massages. Shops selling all sorts of things – backpacks, dresses, head bands! By the time we entered, people were already dancing on the roads. The boys diligently supplied beer, while we shopped. I drunk haggled a Wildcraft backpack for a steal, and I still use it pretty happily. We made umpteen drink-stops on that road, and by the time we were half way down the road, a foot massage seemed like a very good idea. The night travel, the day long shopping, walking around – everything just vanished in that half an hour! Absolute pure bliss! One of the definite high points of the day and the trip.  The last stop for the night was Gulliver’s. I don’t even remember the music they played! 😛 What I do remember is that the guys were trying something funny with tissues. Also, that we finished two Thai beer buckets, second one only because one can’t dance without ordering alcohol at Gulliver’s!

We missed out on the Temple of Dawn and the Floating Market in Bangkok. Still, the beginning was so much fun, we could barely wait for the rest of it. We had a very early morning flight to catch for Krabi. Next in line was Camping at Maya Bay. 🙂