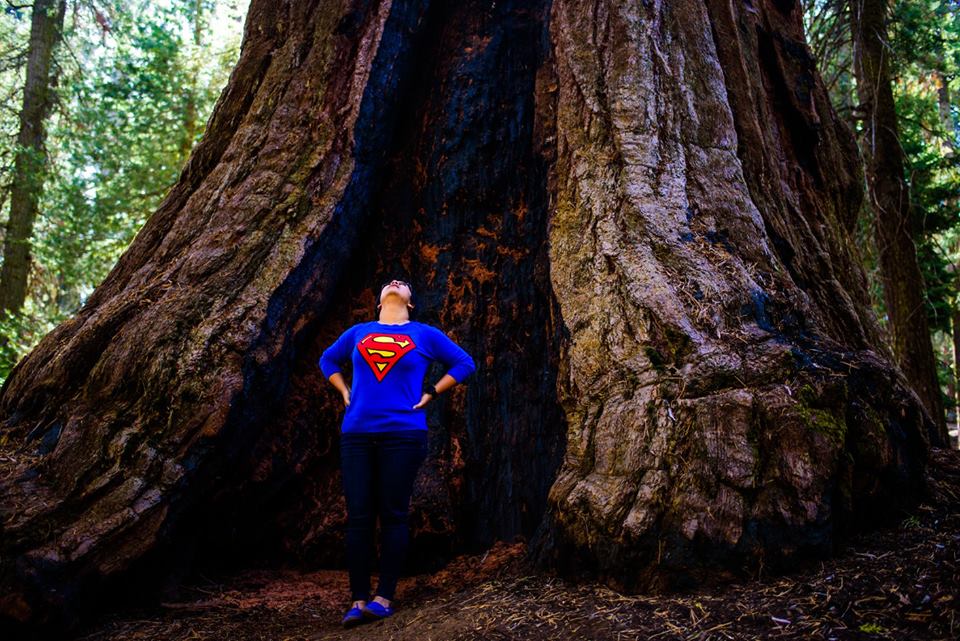 I like how well placed LA is. National forests, vineyards, beaches – all within a 2-3 hour drive (or lesser). Makes summer weekends very pleasant. And spontaneity, fairly easy. S and I had not done a trip in a while. So, Sequoia happened in August last year. It is the forest with the very large trees. We have become extremely used to going to destinations with absolutely no plans. With the advent of airbnb, hostelworld and couchsurfing, the need to plan ahead of time has almost gone away. As usual, all camp sites were booked out in the forest. So we settled for Springville, about 35 miles from Sequoia. Chanced upon Michal’s beautiful place through Airbnb.

That house was beautiful! We had the room on the upper floor. The bed was tucked in a corner, with big windows on both sides and an incredible view. There was a large book shelf on the side with an eclectic set of books. Oh and not to forget, a beautiful wooden deck above the swimming pool, where you could sleep under the stars.

Michal knows the area inside out. Our ask was simple. We wanted to steer clear of big crowds. General Sherman needs you to stand in a queue to get close to the tree. So Michal’s alternative was the Stagg Tree. Very close to Springville and as impressive. Fifth most massive tree in the world (second largest circumference). There wasn’t a soul out there. We settled down with our own things. S kept disappearing between the trees, while I picked up my book and lied down at the base of the enormous Stagg Tree. The size of it is just humbling. Spent about half a day there and then headed off to the Trail of 100 Giants. A bunch of very impressive sequoias. Particularly, remember this one fallen sequoia. Felt like ants crawling in a forest, while walking on it.  The mesh of roots was such a sight!

At the base of the Stagg Tree

Rest of the afternoon and early evening was spent hiking the Needle Trail. Easy to moderate hike. We had to part jog part walk, because it was almost time for sunset and someone at the trail head mentioned that rattlesnakes come out for a breather once the sun goes down! The hike looks pretty steep from the bottom, but it ain’t so bad. Though, the last few steps at the end of the climb was a shade scary for acrophobic self. Then Michal mentioned that she and her 12 year old son had climbed up the almost 80 degree steep rock face years back, also called the Black Magic route (we did the trail instead). Well, I guess that’s when I downgraded our hike grade from moderate to easy. 🙂 The sunset from the top was gorgeous and no, we did not find any rattlesnakes.

It was a brilliant day altogether. Beautiful, devoid of a crowd and with comfort company. Ended the day with a bottle of wine and we put Michal’s star deck to good use. Next day was also one of Michal’s recommendations. As you can see, her suggestions were super and we were more than happy to rely on her! Spent half a day at the Balch Park. Huge trees, small lake and benches all over the place. Half a day there with a book, and then we left for LA.

Probably, we will end up going to the national park next time round. Highly recommend exploring Springville though. Pretty as a picture!

P.S – We did end up going to Springville (and Michal’s place) again. Went to Sequoia National Park too, that too during Fall colours. I still stick to the opinion that Springville is prettier than the national park. 🙂