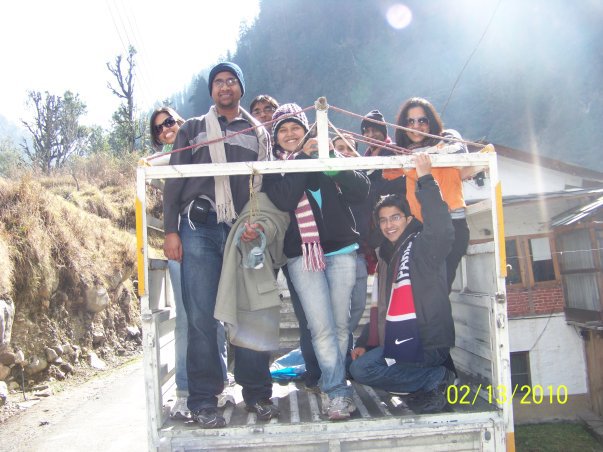 Last few months of MBA are quintessentially Utopian. After spending more than a year lusting for 8 hours of sleep, we finally had the freedom and time to sleep without an alarm. The funny thing about freedom is, once you have it, you wouldn’t bother to indulge in it. So we didn’t sleep. We planned. Dinners, lunches, breakfasts, parties and travel.

As is true for the student community, money was a big constraint for us as well. Sometimes constraints make some really good plans. It all started from some travel blog I was going through. One site led to another, and this place called ‘Shringi’ cropped up (http://www.gonomad.com/lodgings/0810/india-shringi-vatika.html). 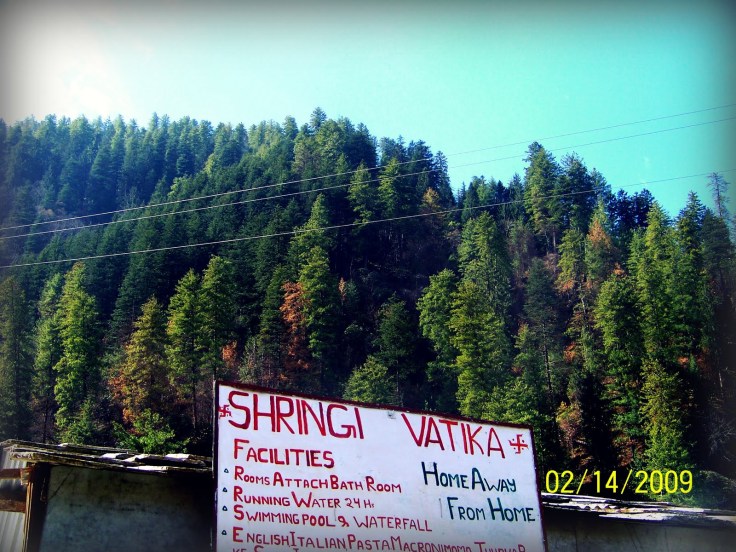 Seemed to fit our requirements –

Before we knew it, we were in an overnight bus from Delhi to Shringi. All of us had seen that one pic of snow clad mountains on the site. With that image in our minds, we got off at Aut. The couple at Shringi had arranged a cab from there. So, happily, with every turn the car took, we kept looking for that elusive image. All we saw were some run down houses and some really bad roads. I think there were a couple of peaks far far away with some snow on top. Quite a few wisecracks and and an hour later, we reached the cottage.

First thought was, this ain’t so bad. The cottage was a small wooden one. We had taken a dorm and a room. There was a small stream running next to the cottage, which had refreshing but bone chilling water. We inquired about snow (since we couldn’t see much of it) and were told that it had snowed a couple of days back and we would see enough of it a couple of kms ahead (mental high five!). So we freshened up (which is a task in itself at near zero temperature) and did what we did best. We ordered breakfast. How we hogged! The restaurant is attached to the cottage and food is cooked by the couple themselves. Food didn’t even travel from the kitchen to the dining area. Most of it was whisked away mid-way.

After our stellar performance, we went in an open truck/vehicle to the place, from where we would trek. The roads were horribly narrow and the view down was as spectacular as it was scary. Then we started trekking along with the uncle from the cottage. We forgot all sensibilities that come with age, split into groups, armed ourselves with snowballs and opened fire. War was declared and no one was spared. 🙂 With wet shoes, wet snow stuffed clothes and numb limbs, we reached the top of the mountain..looking like kids who were upto no good! There was a small shack of a restaurant on top and the sight of Maggi got us drooling. Its amazing how hunger and averse weather makes something mundane seem out of this world. That steaming hot plate of Maggi in sub zero temperature was the most delectable plate of Maggi I’ve ever had! 🙂

Coming down the slope is not my favourite part of the tale. Some people are like mountain goats..I mean they don’t slip or fall…walk comfortably irrespective of the incline. And then some people are like me. I manage to slip on flat surfaces. And the way down was steep and slippery with ice! I had a classic Bridget Jones moment which was captured (and later on, played ad infinitum in college) while coming down one slope. What can I say…I atleast provide fodder for amusement.

The evening was spent in front of a bonfire eating,drinking and as is the norm, pulling each other’s leg. Outcome of all the drinking were some classic ‘we shall laugh over this for an eternity’ moments. Laughter was easy. The company was perfect. And the warmth, smile-inducing in a very nostalgic sort of a way. It was a short trip and one of the nicest I have been to. Like I keep saying, you might go to the most beautiful places in the world but the memories you take back are always of the dear ones you were with.