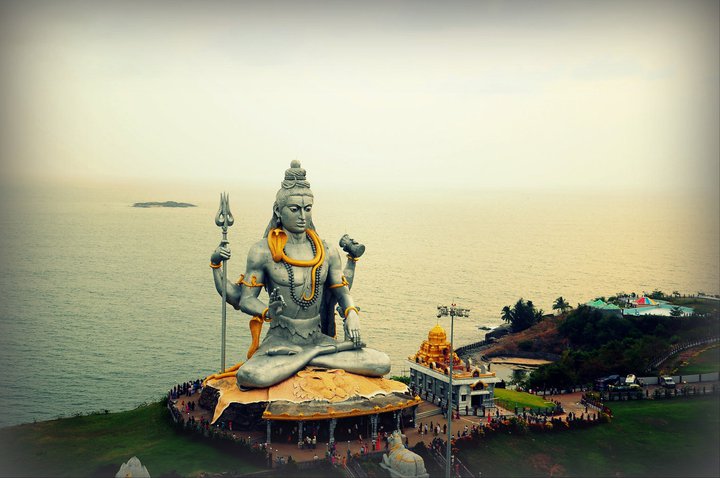 A good traveler has no fixed plans, and is not intent on arriving.  ~Lao Tzu

As per Mr. Tzu, we are good travelers. Really good actually. We had no plan in mind. Whatever little we did in the name of planning, we screwed up royally. One of us missed a flight. All of us missed the train. Missed a bus too! Water transport was the only one which didn’t take a hit, but that’s because we didn’t travel on one. 🙂

It was a long weekend and that just spells one thing for us – travel. So this time we decided to go the rugged way. A road trip tracing the route Bangalore – Shimoga – Jog Falls – Sharavathi Valley – Murudeshwar – Mangalore. I did mention that we missed the train right? So that train was supposed to take us to Shimoga and from there, we were supposed to figure out our way ahead. With no other train in sight, we hired a non AC tattered Sumo..with a driver whose right hand was pretty much like mine..in a bandage!

The journey was back breaking, but that didn’t undermine the fun. The good thing about road trips is that you stop when you want to – be it in the middle of nowhere for the 100th pic or for an urgent loo break. We took detours, idled away time at the backwaters and made mental notes of coming back with camping gear. After a night stay at Shimoga, we headed to Jog Falls in the morning. With mini-Niagara like pictures in my head, I was trying to figure out how I’ll click with all the mist near the thundering waterfalls. Well, when we reached there, this is how Jog Falls looked. The trickle behind me.

The drive from Jog Falls through Sharavathi Valley is extremely picturesque. River, a constant companion…and valleys so green, I could just walk without a destination in mind. Many small lanes fork away from the main road to the backwaters, and we took one of those to take a breather. It was one of those calm and peaceful places, where everyone did their own thing – swam, sat in the water, stared into nowhere, took a boat ride and generally soaked in the good view and the cool water under our feet.

From here, we headed to Murudeshwar. If you google it, the first image that you’ll see is of a huge statue of Lord Shiva. Its quite awe-inspiring, but the place is extremely touristy. Too many people milling around. The view from the top of the temple is breathtaking nonetheless. The beach in Murudeshwar is extremely nice. All we wanted to do was to go to the quiet end of the beach, lie down and let the travel rigour seep away. Watched the sunset there and realised we had clocked enough miles for the day. Found a place for the night and a cure for the fatigue. Some brandy and a lot of food later, we called it a night.

Yes, we never reached Mangalore. For all you road-trippers on a a week long vacation, you must do the entire route via Mangalore till Goa. We just ran short of time, so had to cut it short. Next day, we started retracing our route back to Bangalore. The return trips somehow always seem longer. Made another halt at another obscure and equally scenic backwaters. Dipped our feet and sat dumb for a long while. Made a mental note of hiring a better car next time, as we trudged back to our joyride.

It was a long, tiring journey. A budget one too, with the trip cost coming up to 3k per head. But if you are a traveler,  like the one I am, you would just love every bit of it. The breathtaking view, the tattered Sumo with the impaired driver, the warmth of friends, the incessant clicking, the local food, the unending drive, the mental notes of penning it all down later. Everything.