If you ever had to fall head over heels in love with a city, that too the moment you set your eyes on it, it is definitely Istanbul. Even Bombay takes its own sweet time to woo you. But Istanbul is a heady affair right from the very beginning. The domes, the minarets, the cafes, the skyline, the people. The city has a vibe like no other city.

We entered Istanbul on a grey rainy day. Even the grey looks beautiful here! Stayed at the World House hostel at Istiklal Street. The one thing we had read about Istiklal Street was that the place parties till 5 am and music is aplenty. Truer words were never spoken. 🙂 The nights spent in Istanbul turned out to be legendary. But, more on that later. We had picked the 14 bed dorm which was very very ordinary. Quite cold too. By the looks of it, the 4 bed dorms were much nicer, but we just needed the place to sleep in for a few hours. Didn’t make sense to pay much. Overall, liked the place just because of the location. Everything was walking distance.

We didn’t do much the first day. It was grey and cold and extremely lethargy inducing. Took the Short Circle Bosphorous cruise in the evening and saw the very famous Bosphorous bridge connecting Asia and Europe. What I remember from the cruise is the bone chilling cold and the very hot tea that I held on to for dear life. It is not a very impressive cruise, but yes, one must do it. I somehow don’t like night cruises. The finer details are missed out. If you have time, do the Full Bosphorous cruise. Cheap enough and takes you all the way to the Black Sea and back. We had just too many things to do in very few days, so picked the quicker cruise. At the Ortokay waterfront, there are these numerous food stalls selling waffles and Kumpir. You just cannot and must not avoid them! Kumpir is this big boiled potato in its skin stuffed with fillings of your choice. And hot waffles on cold evenings. I don’t think convincing is required. The night was spent at one of Istiklal Street’s many open bars drinking beer with some new people and some old ones. Turkish folks sure know how to have a good time. The moment any place starts playing Turkish music, the crowd joins in at the top of their voices. The entire street looks like one big party!

Second day was grey and rainy too. Kept cursing my luck! The city is incredibly beautiful. Every moment seemed like a lost photo op. We started with the New Mosque, then Aya Sofya and then the Blue Mosque. The mosques in Turkey have a typical pattern. And through the country, small or big, they look a tad similar. But inside is a different story altogether. Aya Sofya was in renovation when we went, but that doesn’t take away the grandeur of the place. Once a church, then a mosque and now a museum, the place has a warm hue and ceilings so high, it makes you feel very small. Once done with Aya Sofya, we stepped out to clear skies and a hint of the sun. Next was the Blue Mosque.After standing in a painfully long queue, the quick verdict as we stepped inside was that this was much prettier than Aya Sofya. The walls are intricately done and obviously, there are some blue tiles here and there. Looks very very beautiful with the low hanging chandeliers. Next was the Basilica Cistern and the ugly heads of Medusa. Worth a walk through. The water in the cistern has some really massive fishes. So many, that it is almost scary! Dinner that evening was at Sultanahmet Buhara Kebab House. One of the top rated places to eat in Istanbul, and well worth all the ratings! Delectable finger-lickin’ kebabs. Must visit if you are going to Istanbul. 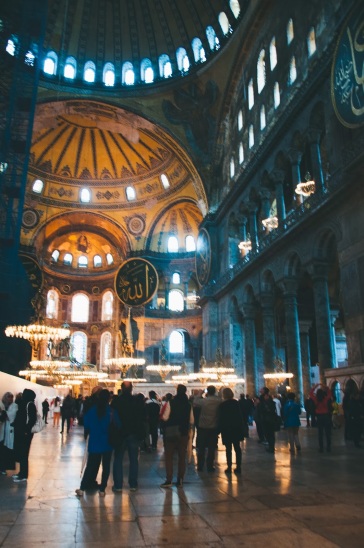 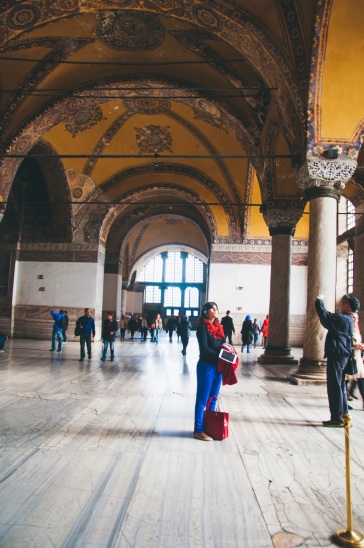 Post dinner, we had booked ourselves in one of the shows at the Hodjapasha Cultural Centre. Absolutely recommended. Mix of folk dances spanning an hour and a half. It was amazing. Each dance was done to perfection. The male belly dancer was so good, that we almost ignored the ladies. The dances were weaved around stories. I think we spent around 70 TL for that show but it was absolutely worth it. There was an option for seeing the Whirling Dervishes, but this just seemed so much more colourful (and entertaining)! Now, how the rest of the night was spent, kindly do not ask. It started at some club or maybe much before at the hostel. I remember walking in. I do not remember walking out. I was told that I sat on the street that night because I did not want to go back to the hostel. Well, I was told a lot of other things too. So, let’s just leave it at that. 🙂 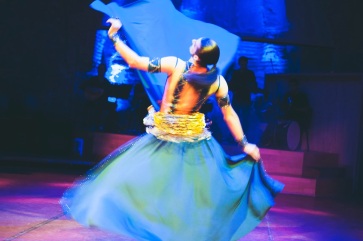 Next morning was absolutely bright and sunny. So much so that I got ready in a jiffy and went walking on Istiklal. Clicking random street pictures in the winter sun is probably my favourite to-do thing. Walked to the Starbucks and picked up a cuppa. Sri joined in and we walked all the way to the very famous Taksim Square. There is a nostalgic old red tram which runs from Taksim to Istiklal, which we took on our way back. I love it when a day starts this well. As a rule, such a day ends well too. So, this was the last day in Turkey. Our plan was to shop for Turkish lamps and then do what one must do in Turkey. Take a bath in one of the ancient hamams. It was a perfect day to walk around in Old Istanbul. I guess rest of the world agreed as well, because there was an insane number of people on the streets that day! We went to the Spice Bazaar first. This narrow corridor packed with shops selling all sorts of spices, teas and a whole lot of other things. I loved it because of all the colours. Others went in a frenzy to buy things. At the end of the walk through the corridor, we had collected meatball spices, pepper, lemon tea, apple tea. These are the ones I remember; the packets had much more. From there, we headed to this street outside Grand Bazaar. Someone told us that the best lamps are available there at good rates. The next few hours were a daze of incessant haggling and lighting up lamps of every colour and perennial confusion about which ones to buy. Legs were ready to give up, and so were our pockets. But with S around, shopping is taken very seriously. Thankfully so, because we brought home some of the prettiest lamps I have ever seen. Lamps ranged from 10 TL to 100 TL. I got the set of three for home for 60 TL as far as I remember.

As far as the hamam is concerned, after hours of walking around and shopping, it probably was the best idea ever! By far, the nicest bath I have ever had. No point giving details about what it is. One of those things that you’ve got to experience. We went to one of the oldest and prettiest hamams in the city, called Cemberlitas Hamami. Soaking in hot water in a beautiful Turkish building dated back to 1584 can be quite an experience. One that we sure took back as one of our fondest memories from Turkey. Costs 70 TL and worth every penny.

The last night was spent club hopping at Istiklal till 5 am. We were all strangely sober by the time the night ended. Probably, very aware that like all good things, this trip had come to an end. Of all the places I have been to, Turkey definitely tops my list. Warm, extremely travel friendly, full of a musical lively vibe and outstanding landscapes. We all left a part of us back there. Somewhere on those pebbly beaches sitting and staring at the sunset or while dancing to Turkish music, we all made a mental note of why we need to visit this country again. As far as I am concerned, I plan to go back to do the Lycian Trail. Very soon.

P.S – Osaidi, without you the trip wouldn’t have been even half as awesome 😉