From Srinagar, we hired a cab till Leh. Can’t really recall how much did he charge, but it was a nominal amount. The distance to be covered was more than 400 kms, and considering the terrain, taking it nice and slow was the sensible thing to do.The scenery changes dramatically as you move from Srinagar towards Leh. The rich shades of green on the mountains speckled with ice get replaced with rocks and sand. Till you reach Kargil, the greenery follows you. I managed to lose all pics of the drive till Kargil because of a virus mishap, but the view is definitely eye-catching! Right after crossing Drass, we reached the Kargil war memorial. The place has a backdrop of jagged rocky snow covered peaks. The view is beautiful, till you get reminded that those were the peaks that our soldiers climbed. In the dead of night at sub-zero temperatures. With hostile fire from top. And nowhere to run for cover. It was a very sunny day and still, there were goose-bumps on my skin. The music of ‘Ae mere watan ke logo’ drifted in. And in that one moment, I think we stood taller with patriotism and bowed down with humility. There is a massive tricolour hosted right in the middle of the memorial. None of us talked. Stood in silence, looked up, looked around. Respect. Period.

A plate of maggi later, we moved on to Kargil. It was early evening by the time we reached and after a fair bit of contemplation about whether we should move forward to Lamayuru for the night stay, we settled for Kargil. Its a very small town with absolutely nothing to do. We stayed at D’zojila; perfect for a night halt. Rooms were basic and comfortable. No need to prebook. We walked in and got a place. Moderately priced; not a lot of scope for haggling. They have a restaurant where the food is pretty decent. They serve set meals; served hot for 300 bucks as far as I remember. Not much to write about here.

Early morning next day, we started the second leg of the journey for Leh. Just in case you intend to travel to Leh, be prepared for a lot of gut-wrenching road travel. Motion sickness and altitude sickness are very common. Come with loads of medicines, in case spinning in circles in a car makes you woozy. 🙂 After Kargil, the rocky mountains start making an appearance in a very grand fashion. Every time you look back, you’ll see snake like roads mapped on brown mountains. The drivers in that part of the country drive with a nonchalance that can make you really uneasy. But you get used to it eventually.

Landscape as you enter Ladakh

If you like clicking even half as much as I do, you’ll go in a frenzy by the time you start entering Ladakh. I just wanted to stop everywhere! Knowing very well, that many of the shots might look just the same. But with a view like that, obsession is inevitable. We stopped at Fotula top; the highest point on the Leh Srinagar highway. Breathed in fresh unadulterated air, stretched and sat here and there pointlessly. We met this Bengali couple who had driven down in their own car (no mean feat) with a dog (named Coco) and a couple of rabbits! I’ll give my clan some credit for this! Wanderlust is an extra gene they are born with! 🙂 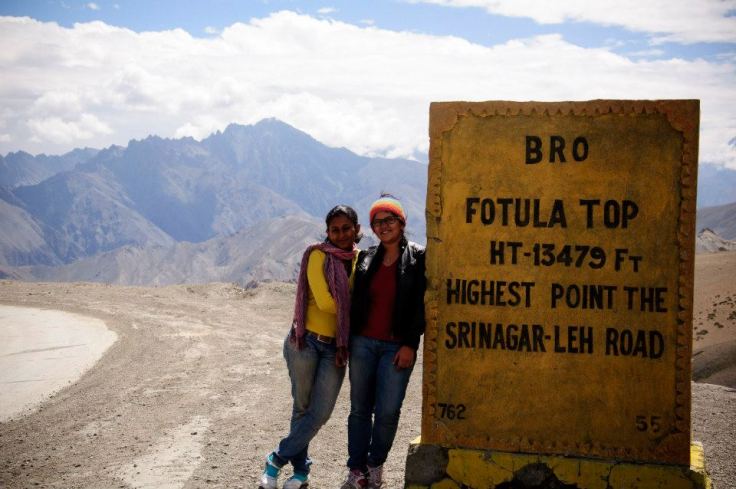 Next stop was Lamayuru Gompa (monastery); one of the oldest and largest monasteries in Ladakh, around 85 kms from Kargil. Its a magnificent view even from a distance. If you have a few days to spare, I’d suggest stay here. There is a guest house right next to the monastery called Niranjana I think. Cheap rooms with a view! Just walk in to get a room. There is a sense of peace in this place. We stayed for a little over an hour there. Went around the monastery in a clockwise direction (Parikrama) spinning the prayer wheels. 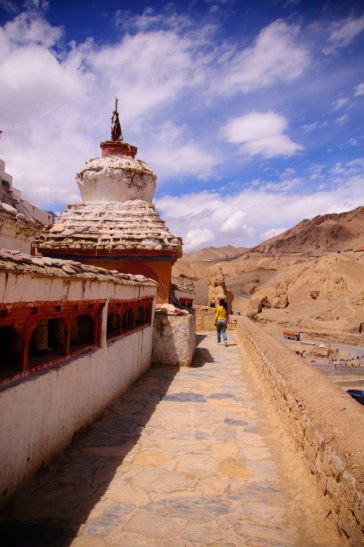 Lamayuru to Leh was another 75 kms. Just when you start getting used to the mountains and topsy-turvy drive, you hit this amazingly flat stretch of road right after Alchi, flanked by mountains at the far end. We just had to stop! The guys raced. Some of us danced. Some posed. I clicked. Almost looked like someone had photoshop-ed it  in here! Leh is full of such unexpected scenery. A desert where you least expect it. An azure blue lake when you’re driving through a green slope. This place can really leave you in awe. 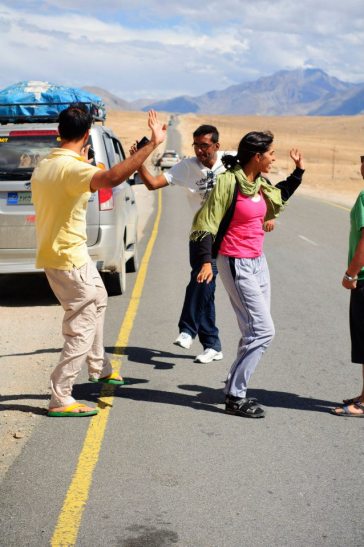 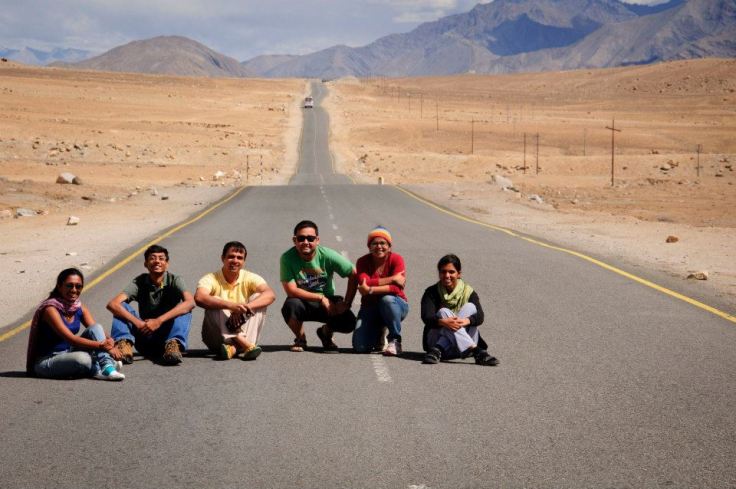 A couple of more hours and we reached Leh. We were picked up by the very dependable Panchok bhaiya – an ex-army guy; our guide and lifeline in Leh. Checked in to this small guest house and headed out for some much needed food. We hit Gesmo German Bakery like it was the last place on the planet which could serve food! Whatever was in sight was ordered and ravished. Yeah, we can be a little scary when hungry. 🙂 Went to the Old Palace in the evening and saw the last rays of the sun move away from the small town.

Three days were almost over and every time when we thought it couldn’t get prettier than this, it did! Next day, Khardung La and Nubra Valley were on the cards.