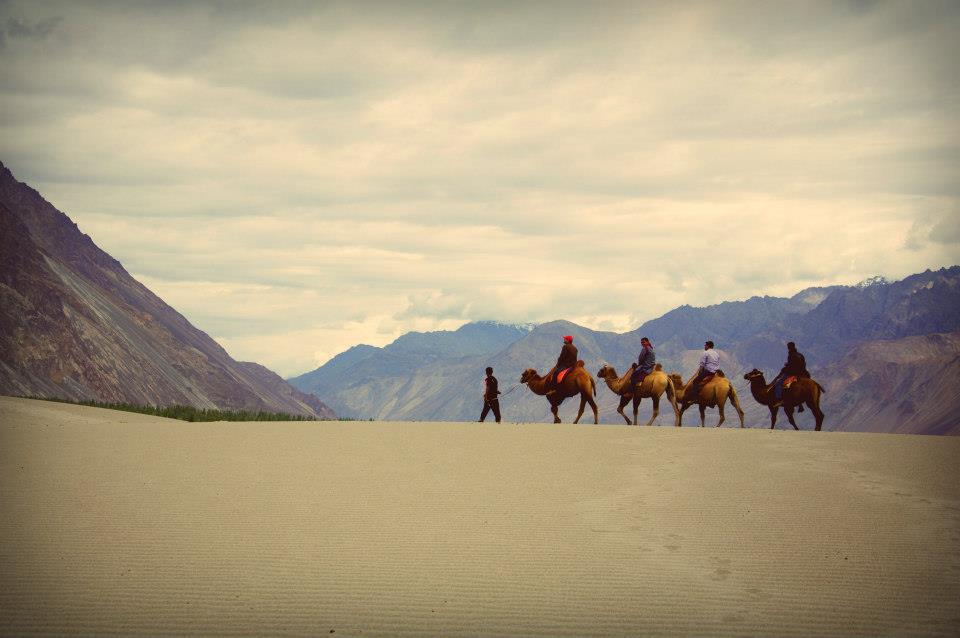 After yesterday’s journey and a good night’s rest, the plan was to head off to Nubra Valley on Day 4. Around 150 kms from Leh (5 hours), the route goes through extreme ups and downs. The famous Khardung La pass is on the way. We started the morning with a walk through the Tibetan market and then a quick visit to the Shanti Stupa.

Leh is at an elevation of approx. 11,500 feet. And Khardung La is at 18,500 feet. The distance between the two places is just 40 kms. So, you gain an immense amount of altitude in a very short span of time – the fastest way to get altitude sickness! Each one of us popped a Diamox (alt sickness med) and crossed our fingers. The view is breathtaking and the air just keeps getting thinner and thinner. The roads are pretty decent till South Pullu, but after that its the highway to hell! By the time we reached Khardung La, some of us had started bearing the brunt of it – nausea, throbbing headaches, breathlessness. I know I am not painting a very good picture, but don’t give up yet! 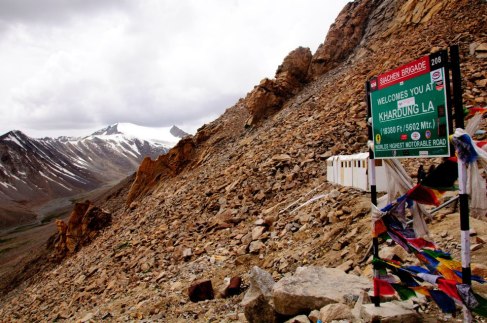 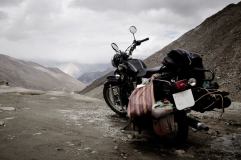 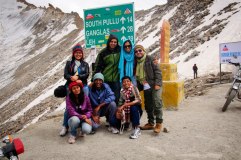 Khardung La is supposedly the highest motorable pass (sure felt like it!), but someone mentioned that Tibet has a higher one. The Rinchee cafetaria there almost cures you with hot black tea and Maggi that tastes so good, it can bring you back to life! 😀 They even have a Maggi Story written on the front wall. With faint smiles back on our faces, we were taking in the view all around us. And then, out of the blue, it started snowing! For few of us, that was a first. The faint smiles broke into huge grins. The bitter cold was instantly forgotten. Nature floored us that day. First, with its ferocity, and then with its beauty. Saw the might of human spirit too. So many people who cycled their way to Khardung La! Cannot fathom the level of strain that puts on the system! Oh did I mention that Coco was there too (the Bengali couple’s dog), in a shiny red jacket!

Just when we were supposed to leave for Nubra Valley, road maintenance began and we were stuck at that high altitude for hours! It is suggested to halt at Khardung La for maximum 30 minutes and move downhill before altitude can take its toll. Well, what happened next was inevitable. I was horizontal in the backseat of the Xylo. The others zoned out too. The last man standing was the thinnest and frailest of the lot! Ironies of life. 🙂 After what seemed like forever, we finally started for Nubra Valley. The moment altitude decreased, ears popped and sanity was restored. We spent the night at a camp in Nubra. Good food and comfortable tents!

The one thing that stands out about Nubra is sand-dunes! Right in the middle of those snow-capped mountains! Its such a jaw dropping sight! 🙂 Camel ride was what we did the next morning. In my opinion, skip the smelly ride and just let yourself go on the dunes! Exactly what we did after getting off those camels. We rolled in the sands, danced, ran. Some meditated too. 🙂 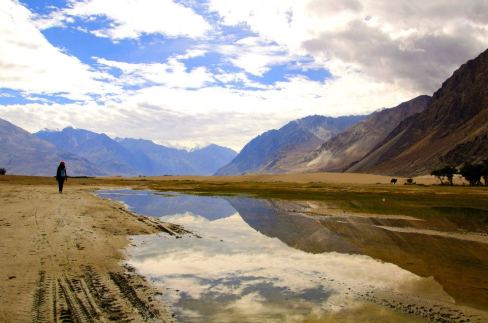 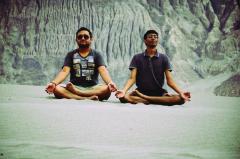 Few hours there, and then we headed off to Panamik hot springs. A 40 km diversion en-route to Leh. As far as scenic views are concerned, this place might not be very high on the list. But what is up there on the brilliant list is the hot spring bathing area. A small indoor pool and a few showers with water from the hot springs. Needless to say, we had the best bath ever! God knows if the water blessed us with medicinal goodness; but standing in that steaming hot natural water was the nicest sensation in the land of low temperatures and poorly equipped homestays!

Maggi had by now become our staple diet. A couple of rounds of it followed by some mingling with the local school kids and we were good to go. One of the kids was quite the rockstar; dancing gangsta-style to whatever the others were singing. This was the fifth day of the trip and we were getting very used to the scenery around us. Greenery, mountains, snow, valleys, desert – we were not turning back to stare again and again at all that was whizzing by. And then, while we were on our way from Panamik to Khardung La, a dust storm started far away. And sun rays were filtering in through the dust. We not only turned, but stopped, got out of the car and took in the view in awe.

The trip was half done. Next was Tsomoriri.