In the last three days, the setting sun has left us in awe. First was Kas. It is a small town by the bay with an extremely happy vibe. We reached Kas around 4 pm, checked in to Santosa Pansion and immediately left for Kaputas beach. The beach was a good 30 minute drive from Kas and the view was breathtaking. You have to climb down around 160 steps to reach the beach. From the top, it is an awesome sight. Blue waters, mountains by the side, and all the people and the colours. The sky changed colours to different shades of orange. There were jets leaving trails in the sky. I spent over an hour sitting in the water and just staring at the sky. We left around 7.30 pm with no mini buses in sight. The good thing about traveling with friends is that every situation can easily be turned into a joke. So, we started walking in the moonlight. We could see a fish restaurant in the distance. Fish trumps no transport, by far. Kas town square is brilliant. Small cafes and bars dot the entire place. There is music everywhere. Sitting in the open is the norm. The place is full of small bylanes with green creepers growing on walls and roofs. Looks very idyllic. 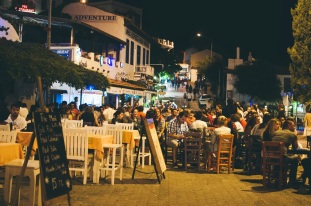 Next morning we left for Fethiye. Around 2 hours journey from Kas. The most famous beaches near Fethiye are Oludeniz and Butterfly Valley. The entire region is extremely well connected with mini buses (called dolmus). We decided to go to Butterfly Valley yesterday evening. Missed the last shuttle boat, so ended up hiring a speedboat. Turned out to be a really good decision, as by the time we entered the beach, the last shuttle back had left. Which meant that there was no crowd. We opened bottles of Efes malt beer and watched the sun set. This beach too had pretty steep rock faces on both sides. On one of the sides, perched up on the rocks was a bar called ‘The Rock’. Definitely the best I have been to! Small shack of a place, with cushions thrown in right at the edge. Music was so good and the view was surreal. We held on to our drinks and watched the last remnants of sunlight go away. I felt blessed. Old friends and new places. I know that when I look back at this trip, this particular moment is what I shall think of. So happy and warmth inducing. We spent the evening at Oludeniz. I managed to beat a couple of Turkish guys at pool. 😀 They were not very happy about it. One of us convinced the DJ to play sheila ki jawani. And then, we brought in a bit of India into Turkey! Some serious dancing happened. 😀 The turkish men were forced to dance too. 🙂

Today morning, we left for Saklikent Gorge. Around an hour’s drive from Fethiye. The bus was extremely artsy. Hearts and pink pillows everywhere. 🙂 Saklikent is rated as a must visit in tripadvisor, and rightly so. We rented wet shoes and started walking in the gorge. One has to walk through water. It was brilliant! The rock faces were steep and well cut, with sunshine lighting up bits and parts of it. I was carrying my Nikon, and the way was pretty tricky. After 2 kms hike, we reached a waterfall. Freezing water dropping from the top of the gorge. Standing under it literally took our breath away. Maybe the photos shall give an idea about how beautiful the place was. The scale of it was awe inspiring. After the hike back, the turkish tea felt heavenly. From there, our driver took us to the Yakapak restaurant on top of a hill. There was gushing water, trees, tables placed on wooden ledges overlooking the mountains and absolutely wonderful food! We were ravenous and everything we ordered was perfect! The only place so far where we volunteered a tip. Lunch was pan fried fish, moussaka and shrimps in butter sauce. There are two bongs in the group. Joy was abundant and evident. 🙂 We didn’t have enough time to see Tlos in detail. So, clicked just a couple of shots there. 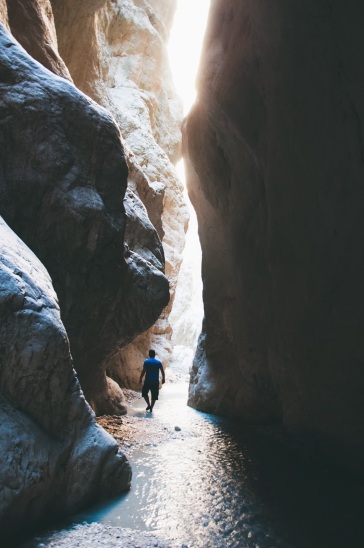 Waterfall at the end of the gorge 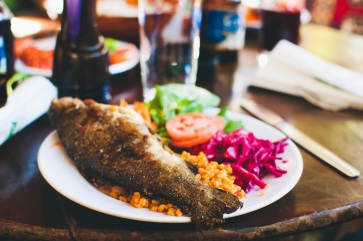 Right now, in a bus to Pamukkale. The sun set today was along the mountains. Different kind of beautiful.:) Turkish people are quite friendly and helpful. And honest! Such a refreshing change from India, where cellphones disappear in a blink. Almost half way through the trip. We have started talking about where next.

Posting a few pics of Kas. Rest when I download the camera shots. More from Pamukkale!

One thought on “Of sunsets and small towns”