I am sure that caught your attention. I never write about work. Atleast I try not to. Completed a month here and work has managed to take every little ounce of my free time. In India, work was not easy, but it was not all consuming. I could call up a few people, take an easy coffee break and sometimes even watch a FRIENDS episode. If my ex boss is reading, that was only sometimes. Rest was all solid sincere work. But, this, right here, is an altogether different ball game. My boss says the office functions like a mini White House. A month down and I almost agree with him. There’s politics, a zillion meetings and some very important looking people. Meetings where I can’t snooze for even a second. Anyhoo, I slept for 12 hours straight for two nights and feel so very fresh. Not even thinking about Monday right now.

Starting with big updates, I have moved to Simi Valley. It is the retirement home of CA. For those of you who are thinking I am living it up in the night clubs of LA, well here’s a mental image. Deserted roads. Malls with all of ten people. And dinner by 6.30 pm (7 pm is almost late). Top it with tons of work and now tell me, if anyone wants to switch places with me. 🙂

So, let me think. Last four weeks were not just work. I managed a trip to San Francisco through the Pacific Highway. Pretty as a picture. It’s a long winding road, perfect for folks who like to drive and those who like to sit by the side and sip on wine. No prizes for guessing which side I was on. The route reminded me of the Turkey bay side. I missed the small villages that Turkey boasts of though. Camping grounds are available by the dozen. Most people here head out with their cycles, tents and surf boards on long weekends. On the cards, once the licence and car are done with. Met some old friends in Fremont and San Francisco. It was a warm weekend. Kaddu is all grown up now. Ties his daughter’s shoe laces. 🙂 Still makes no bones about cracking mean jokes. And still dishes out brotherly advice. Thankfully, some things don’t change. Payal has strictly said that San Francisco cannot be called SFO (because that is the airport) or San Fran (I don’t remember why though). So you see how I have been sticking to San Francisco every time I have to talk about San Francisco. 🙂 The city has an amazing vibe and definitely deserves a separate post on the travel blog. For the time being, it should suffice that I had the best Thai massage in downtown somewhere and beer and conversation was the order of the day. 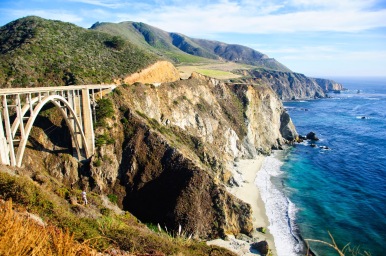 Also, made a two day trip to San Diego. For the last eight years, all that I have heard from Shubha is when am I visiting or moving to US. It was high time that we met up and put this to rest once and for all. Not that you can put anything to rest when it comes to Shubha. Her lists never end. Visit to Boston. Wedding day plans. Patna Plans. Not that am complaining. After 25 years, eccentricities feel like the norm. It was a family weekend. There was litti (if you are a Bihari or you have known one, you know why this is special), mutton, early morning coffee and just so much of laughter. 🙂

I have become a frequent traveler on the Amtrak train. Ironically, trains here take twice the time you would take by road. Yet, I use it because the station is a mile away from the hotel. Things that are walking distance have new found respect nowadays. The cafe is the most popular hangout in the train and obviously, beer and wine are the most popular items on sale. A wise old guy sitting with me in the cafe suggested (after his fourth beer), that I should not be such an introvert and should share my life’s stories with him. Reminded me of this one time in school, when my class teacher gave me a similar talk. Needless to say, I smiled and walked away.

Bought a cycle. A white and blue hybrid Diamondback. Sounds bad ass, but it’s just a pretty little thing. Somehow the Walmart cycles do not inspire any confidence, as cheap as they are. So I bought one from the local bike shop. Nick and Brandon did a stellar sales pitch. And I am convinced easy. It is nice to have a set of wheels here. Was almost sick and tired of asking someone or the other for a ride for simple things like a box of milk! I park my cycle in my hotel room. Weird as that sounds, apparently it is the norm here. Cycles get stolen at an alarming frequency here.

Oh I am not homeless anymore. 🙂 I saw two apartments and I liked one. Shopping has always been that simple for me. It is a studio; so small that if you take a big leap from the door, you’d probably fall out of the balcony. Cozy little place with a Murphy bed, kitchen and a tub. Think I should be alright. Cannot wait to get out of this hotel! 9th October is moving day. I think the apartment guys get a lot of Indians. I have been warned not to dry my clothes in the balcony. 😀 Ofcourse, Ma has frowned at this ruling. No vitamin D for the clothes is an Indian mother’s nightmare.

Amidst all the incessant work, I have lost track of important things. Long conversations with Ma. That pending skype call with Thakuma. The letter I should have sent to C on her birthday. The call I had promised Sam. I have a long G-task list, and these are the ones which haven’t been ticked off for a while now. Maybe next week I will do better. Maybe next week, the blog post title would not have the word work in it.