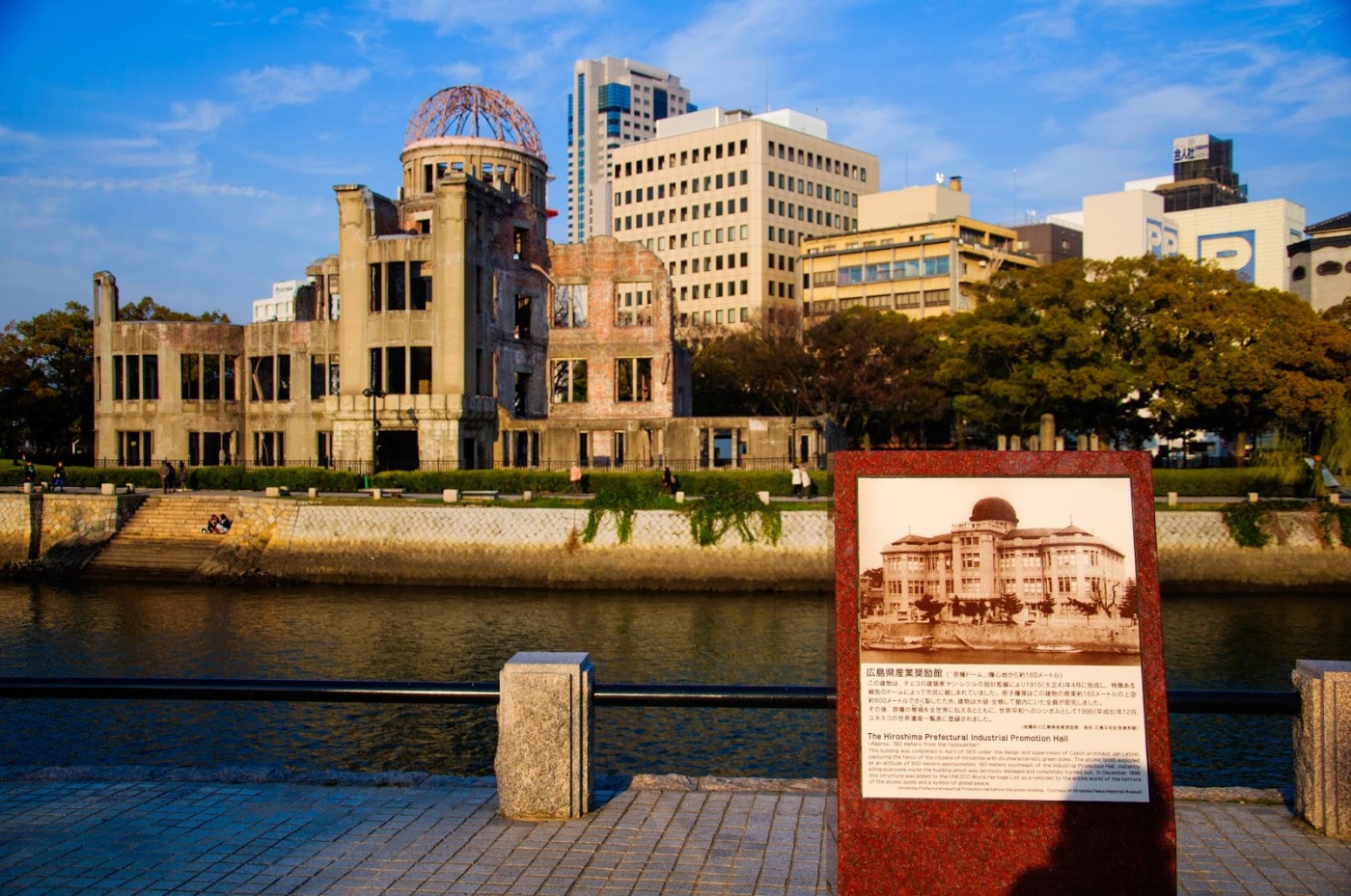 Hiroshima shook me up. The peace memorial museum has this big picture of a pocket watch which shows the time of the bomb drop and these words –

A dragonfly flitted in front of me
and stopped on a fence.
I stood up, took my cap in my hands,
and was about to catch the dragonfly
when…..

And you are standing right in front of it, reading these lines. I remember there was a hum in my ears drowning out thoughts and people around me. I spent about an hour there. An hour that felt like an eternity. An hour after which I had goosebumps in the sun. An hour after which I had to run to catch a breath. Photos after photos of such magnitude of tragedy that your life would seem royal. There was a stone wall kept on display which had the imprint of a man who was burned in the bombing. Heart rending stories about kids who never saw another day. Burnt clothes, burnt hair and memoirs of people who survived. Barely. This was my birthday eve. There was no party. No music. Just one single realization. That I must count my blessings. Every single day. That I must live without a complain or a regret. They say travel teaches you many life’s lessons in the simplest of ways. This was one of those days.

The journey from Kyoto to Hiroshima takes about two and a half hours by the Shinkansen (bullet) train. Our plan was to do a day trip here. We started with the Miyajima Island and then moved on to the atomic bomb dome and peace memorial museum. Miyajima Island is a short train and  ferry ride away from Hiroshima station and it is free in case you have the JR Pass. Initially, we had thought of staying over for a night in Miyajima, but we dropped the plan for some odd reason. On hindsight, it seemed like a good plan. It is a very small island town with a big orange tori gate in the sea, from where sunset would have been beautiful. As usual, our time estimation was a complete failure. What was supposed to be a quick one hour walk through Miyajima turned out to be a 4 hour affair. The day was beautifully sunny, there were people walking everywhere and the town had a happy holiday-ish vibe.So, we walked along the sea and soaked up the sun for hours. 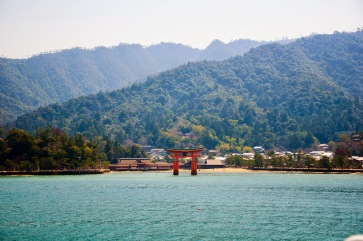 The deer in Miyajima are a scary bunch. They attack people and its not funny! One of the deer caught hold of a guy’s suitcase and held on to it for dear life! Another one was in a one-on-one duel with a very distraught and angry Japanese man. His kid was amused though! 🙂 The Itsukushima Shrine is the single most famous place to see at the island. A Japanese couple had come for their wedding photo shoot here, and needless to say, I was elated! 🙂 Everyone with a camera or a phone turned into paparazzi (including me). Oh in Japan, unless you have a full frame pro camera, don’t even try looking at what camera the guy standing next to you is using. Everything is so high tech, that I felt extremely poor with my Nikon! 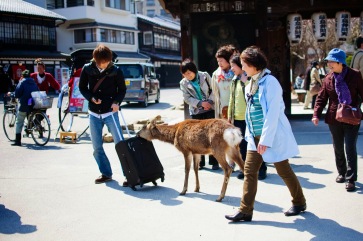 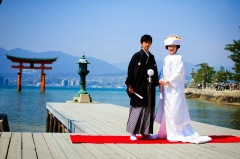 We had lunch at a small hole in the wall place. We entered to grab a quick snack, which became an hour long round of beer and multiple rounds of whatever food we could lay our hands on.There was world map at that place where travelers had marked their countries. We were the first from India. 🙂 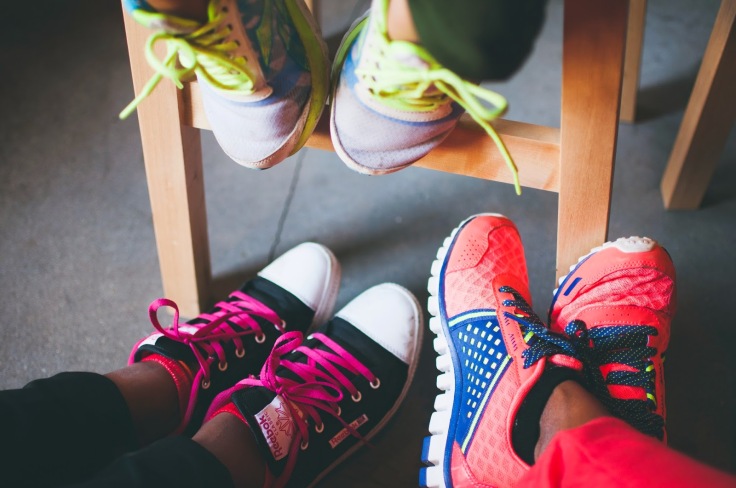 We were quite late for Hiroshima. By the time we managed to reach the Peace Memorial Museum, it was late afternoon. Walked up to the Atomic Bomb Dome, which was ground zero for the Hiroshima bomb. It was a warm day but somehow, such places never feel warm enough. Supposed to be a symbol for peace, but the skeletal building was just a reminder of the immense scale of tragedy.

Its a beautiful place, very green and with a river right in the middle of the park. We walked around a bit and then headed to the Peace Memorial museum. Right before entering, I saw an old woman holding her head and crying. The kind of crying which makes your heart ache. I can say a lot of things, but probably nothing will prepare you for the walk through the museum. If anyone of you have been to the concentration camps in Europe or the killing fields in Cambodia, you know what I mean. The place lays out description and photos of the entire tragedy in extreme detail. By the end of it, I was at a loss. No matter how you explain, killing innocent people will never make sense. There are audio tapes of people who speak about their experience, remnants of their burnt possessions and photos which leave an indelible impression. Even now, when I think of it, I get uneasy. That evening was a blur. Could not concentrate on conversations. Could not eat. But at the end of the day, I would say it is a must visit place. You would come out a better person.

We went to this amazing okonomiyaki place in Hiroshima for dinner. Sad that I didn’t have any appetite. It is a Japanese version of a pancake with toppings that you can choose – any meat, green onion, mushrooms and so on. It was absolutely yum! Hiroshima style Okonomiyaki is pretty famous out there. 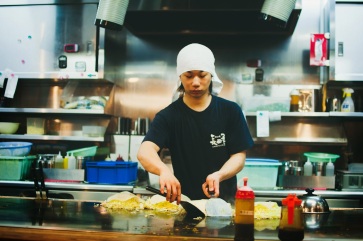 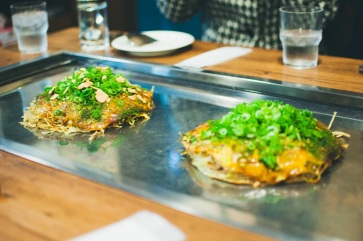 So that’s about it for Hiroshima. By the time dinner got over, it was quite late. We boarded the Shinkansen and headed back to Kyoto. It was almost time to sing the Happy Birthday song. 🙂