Of late, age and memory have not been best of friends. That doesn’t mean I don’t remember your name or the address I call home now. But, I find it difficult remembering what life was like ten years back. It is absolutely okay, I guess, to not remember what you were like as a toddler, but I am talking about early twenties! I do remember bits and pieces of it; the highs and the lows, but the mind is missing the mundane pieces. And I thrive on the mundane. The songs that were on loop, the books I read, the forgettable mistakes, the bylanes I walked in and the acquaintances who never became friends. The point being that scribbling on the blog helps in connecting the dots. So, a renewed resolution of penning down day to day trivia.

Okay, so one and a half years down in LA. Let’s play catch up. I drive like a boss now. Road rage, multitasking in the car, wrong turns et al. Got slapped with a speeding ticket too, which I am still very sad about. A whopping bill and a very angry cop later, I have mended my ways to stick to +/- 5 of the speed limit. A bit of Californication has happened. I understand 101 jokes now (if you didn’t get it, you haven’t been here yet). A run of the mill evening conversation is always interspersed with 405, I5 and the dreaded 101. Also, I recognize cars much better now. As in, never drive next to a Maserati/Tesla/Porsche/etc. I will have to sell my car (and my organs) to pay for any damages, if I nick them!

I moved to Glendale last October. And I love it! The apartment and the surroundings. I am still living in a studio, but it is not a hole anymore. 🙂 That also means that I am giving away pretty much half of my paycheck for that roof on my head. The walls are plastered with photos I have clicked in the last five years. And yes, if that is narcissism, so be it! C and I are working on putting up this world map photo frame on one of the walls. Can’t wait. 🙂 Oh, I used to think I am the stud at living alone. Well, not so much. There are good days and bad days, and recently, the former has thankfully outnumbered the latter. So, I guess am doing well on that front too.

Anyhoo, adding on to the list of why I like where I live. There is Griffith Park and LA Zoo in my backyard. Perfect running and hiking trails. If you have lived in California for over a year, and haven’t started throwing in the word ‘hiking’ intermittently, it is a problem. 😉 Coffee shops have been slotted into like and dislike slots. Starbucks has hit the extreme dislike slot. My favorites are listed here. Speaking of coffee, it is really difficult to not become a coffee snob here. And I don’t mind being one. 🙂 I still don’t like black coffee. The one that has hit the top of the list is macchiato – a small cup of espresso with a dash of milk. It might sound pretentious, but only this gets me going everyday. Also, Starbucks macchiato is not macchiato.

Meeting people in a city where you refuse to mingle with work folks and you don’t know anyone outside work, can be a problem. More so, after crossing the second decade. And C and I are not very social. We like comfort of the known (well, who doesn’t!). But that’s a terrible terrible habit. So the attempt to find friends through meetups, Internations and Couchsurfing. I for one, highly recommend it. This badminton meetup I have been going to, is probably the most refreshing break I take every week. Also, it is a kick to my self respect, as I get many flaws pointed out in my game! One of the coaches looks like Professor Snape (uncanny similarity!), so criticism is fairly easy to consume. 🙂 Internations has been pretty good too, as I have realized in the past couple of weeks. Note to self – don’t be intimidated by the prospect of saying hi to a stranger.

Weekend is almost out of the door. Friday night was spent at this place called The Edison. Blurry night, but very fun! The place is in a hotel basement and very grand! Avoid the absinthe fairy as she sells juice in absinthe bottles. C was not happy! Saturday was spent recovering. And I saw Spotlight. My mind does not process child abuse movies well. Still reeling. Excellent movie though. Also, saw The Room. Yes, I am watching the Oscar movies a week late. Disturbing, but a very good watch. Visited The Last Bookstore today (finally!). Head over heels for the place. You walk in and the smell of books hits you. My favorite kind of smell. ;:) Two floored labyrinth of books, art, LPs and more! They sell and buy second hand books. Separate section for a collection of rare books. Spent a lot of time in the history and fantasy section. Obviously, bought more books than I needed. Its a weakness I am aware of, and not guilty of. 🙂 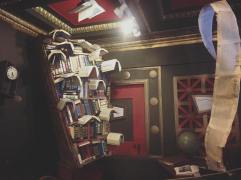 There was a farmers market right outside, where I picked fresh garlic bread. Walked in the sun for a bit and found a coffee shop that I liked. That’s where I am right now. More later!