Realized that this blog has not been updated ever since I moved to US. Last eight months have been a blur. Moving to a new place has its own learning curve. Learning to live without a big network of friends, learning to drive, learning to see your family through Skype. The list is long. As usual, time and distance have been the greatest teachers. More on that on the other blog.  Finishing up the long pending Tokyo post. This one is a guest post from S. 🙂 S has a fairly severe case of ADD. So, she zones out at an alarming rate. Took her a lot of willpower (and time) to write this one. So, here goes.

April 2014 – We took the last train out from Fuji and reached Tokyo late in the night. Having spent two days in the sleepy town of Kawaguchiko, we were looking forward to the nightlife in Tokyo. And Tokyo did blow us away. This city seems right out of those futuristic movies. Skyscrapers, bullet trains, people hurrying around like it’s the end of the world. It was a stark change from the laid back towns we had been visiting. It was almost like Bombay but again set in the future. Khaosan, the hostel we stayed in, was a hop skip away from the station. The hostel itself was located very conveniently and the rooms were very comfy.

Morning saw the arrival of Chango in his elements; bottles of alcohol and a single minded mission to get all of us drunk. With the sun shining down at us, we hopped our way to Ueno park hoping to see cherry blossoms. Well yes! We had only managed to catch one branch in bloom in Kyoto and a twig in bloom in Fuji. And my logic was the trees closer to the houses were closer to bloom due to the warmth 😛 or maybe the kids and oldies used the dryer on them just for fun 😀 Anyway… so we HAD to see a full tree in bloom!

Wading through crowds was common scene in Tokyo. Or maybe it was Sunkara that drew the crowds. Ueno was packed. We hardly managed to find a spot on a slope since the flat grounds looked like an ant colony only with merry people. The high grounds did give us a good view of the festivities around. Musicians playing, kids running wild, drunks falling flat on their face (Just in case you were curious, this was the crowd puller). Dipa as usual tried to stalk few of the kiddos and sent them running for cover. Chango kept himself busy making lewd jokes and making sure our glasses were never empty. I remember vaguely, Sri and I were helping ourselves with the bottle of Sake. Su was attempting at being social and coordinating for the longest time to catch up with Mayur and his wife. We did say our hellos when Su managed to locate them by 4 PM.  We did get instructions to behave while we socialized :). We tried. 🙂

What happened next is the harrowing rowing episode. We heard of Chidorigafuchi that boasts of the best view of the cherry blossoms along the canal. So in our MERRY state we headed there and rented two boats. Dippo and me in a boat with a bottle of wine and beer. And the rest in the other boat. Well at this point we should have realized what is wrong in the boat occupancy. Thirty minutes into the rowing, we met down the canal and clicked pics and the whole thing was so darned pretty. With dusk, the lights came on and the cherry blossom branches leaning in towards water were quite a pretty sight. What followed was two drunk girls trying to row their way to the shore for a very very very long time. For the second night, we had booked the Japanese style (tatami) rooms. The room did have interesting colored glass art on the ceiling and the side walls. It gave the room a very.. hmm… for lack of a better word let’s say dance bar effect 😛 We were tired from the rowing and called it a night but only after Dippo’s performance 😉

Next morning we tried the famous conveyor belt sushi experience. It was the first time for Dippo and me. We loved it! Ohtoro was my personal favorite. You pick a pate from  the conveyor belt and they are priced based on the color of the plate.  Sri was in her happy place J We then walked through the shopping street while it drizzled. One particular souvenir of an old Japanese couple that I bought for mom and dad was my favorite. Sri had her flight from Tokyo, we bid our byes with promises to meet and headed back to Osaka. Rest of Osaka is a blur. We went to the Dotonbori area and thought we will try out some pubs. Ended up in a Korean pub. Chango took over the bar and Su, the music. Rest of the night was spent dancing to chikni chameli and choli ke peeche over countless shots and Korean video. We even got the bartender drunk. Lets just say no one remembers how we reached back to the hostel. We were just glad to wake up in our own beds the next day.

My best food experience in Japan was at Kani Doraku. It’s a crab only place. I rest my case. Never have I seen a restaurant that serves only crabs! They are grilled, fried, baked, boiled, roasted and more. We spent a good part of the day just trying most of the crabs dishes on their menu. There was one dish where they set up the dish on your table and you let it cook on your table for 45 mins. After we were full till our ears, we had to walk to keep the food inside. We headed to the Osaka castle. Not before we packed some hot cheese cake (people stand in queue for these and you get them straight from the oven) and strawberry ice cream rolls for a picnic at the Osaka castle parks. The park was in full bloom and the colors during sunset were stunning. You could see the confluence of the past and the present. The skyscrapers across the river and the majestic Osaka castle on the left. 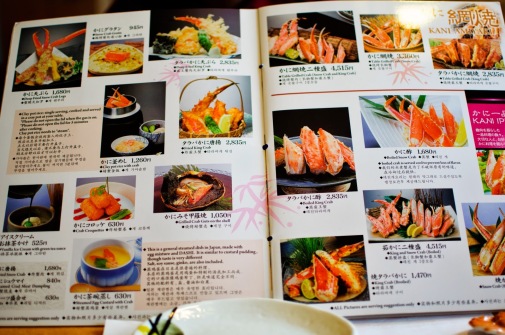 I don’t really remember the movie Love in Tokyo. But I did manage a Sayonara dance on a rainy day in Tokyo with a borrowed blue umbrella. The Japanese are full of warmth and I was in my happy place in Japan. The place has so much to teach you and humbles you with its history and beauty.

Footnote from me – Spent an obnoxious amount in Osaka that drunken night. Note to self to never allow Chango to take over the bar!