Work and holidays happened. So, this post got stalled. Some of my fondest memories from the trip are probably from Reykjavik. Compared to the other parts of Iceland, this city (also, capital of Iceland) probably does not match up in terms of landscape. But, it is definitely one of the most interesting and fun places to go to, if you want to soak in the local culture and vibe. 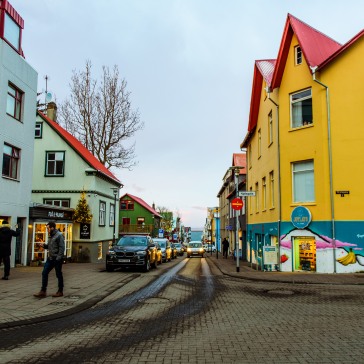 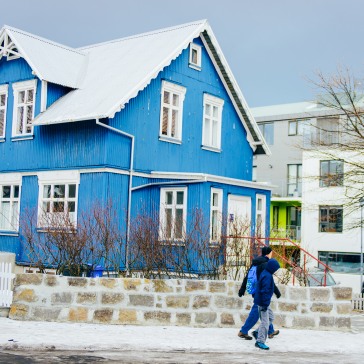 I took about two days to pronounce Reykjavik correctly. Stepped out of my car the first day, and landed on my ass, fair and square. Ice can be slippery and humans can be careless. What can I say! Also, got yelled at for FaceTiming in a public space. Surprisingly, I was more amused than offended. But don’t do it. The yelling can freak you out a bit.

I spent two days here, in the beginning of the trip and then, another 3 days towards the end of my trip. And loved every bit of it! Couchsurfing has been a blessing throughout the trip, but a special shout out for Reykjavik. Used it mostly for the hangout feature, to meet fellow travelers. And that is how I met Mr. Palladino, from Tuscany.

I have immense respect for dark humor, and he was so full of it! Our time in the city overlapped a bit; so quirky plans were made fairly quickly. Saw an Icelandic movie which was worth every Krone spent. Dire theme and a very ‘Roald Dahl-esque’ ending. What’s not to like! We threw in a trip to the Phallological museum as well, and Mr. Palladino picked an extremely inappropriate birthday gift for his dad (who just turned 80). Actually, we just went to the gift shop. Not paying an entry fee for a penis museum! Copious amount of food was also consumed. I think I wrote about Svarta Kaffid already and their life-changing soup. Quite loved Cafe Loki too. A fairly popular tourist spot, but not a sham. The food is really good! I had one of the Icelandic plates, and it was delicious. Highly recommend. Big Lebowski (the bar) was visited again, and at some point in the evening, I remember getting free shots from some random bunch of people. Mr. Palladino didn’t get any and I don’t really remember why!

Movie – Under the Tree 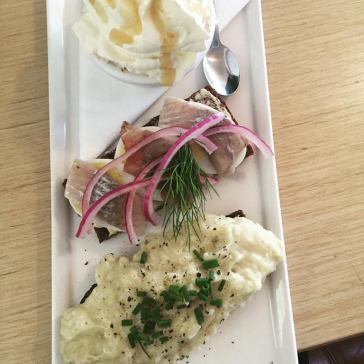 Also, I had a fairly interesting evening (on hindsight) with another Couchsurfing Icelandic local. I call it interesting because that evening could have gone down very differently! I had a 100 scenarios playing in my head. 😀 That’s all I am willing to say. It ended very well though. Went to the hot dog stand made famous by Bill Clinton. Because that’s what I do – visit places made famous by Mr. Clinton! Average hot dog though. Saw the Hofdi house where Gorbachev and Reagan had met to end the Cold War (brand new information for me). Also, saw the prettiest view of the city from the Pearl. A really good looking restaurant on the top of a hill.

Oh I did spend a significant part of my time at Cafe Babalu. It is the coziest spot in Reykjavik! Right from the owner to the ambiance and the soups and mocha. Also, this place gets the prize for the best restroom in the world! It has a Star Wars themed restroom, with music, life size posters of Princess Leia, R2D2, and the works! The owner, Glen, met his Icelandic boyfriend in US in the 90s. As predictable as it can sound, his partner’s visa expired and they moved to Iceland. Iceland, even in that decade, was progressive and allowed legal union in the LGBTQ community. Rest as they say, is history. Glen never left Iceland and that cafe stands as one of the warmest spots (literally and figuratively) in downtown Reykjavik. I love a good story, esp. the kind with a happy ending. 🙂 And to top it, Glen bought me a free coffee! Not just any coffee, but he checked with his staff on the coffee I had been buying every day and put that on the postcard he gave me. 🙂 Heart = melted. 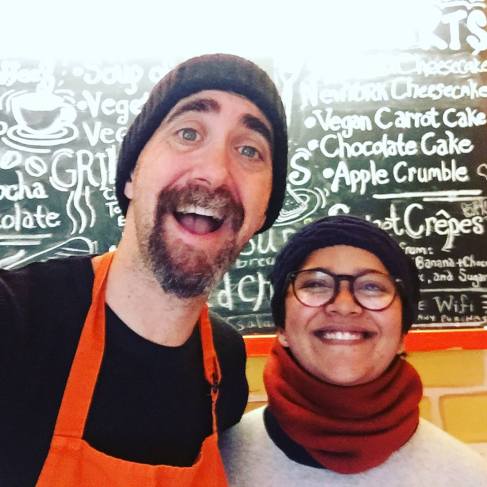 Postcards at the cafe

And the free coffee!

The Hallgrímskirkja church in the heart of downtown Reykjavik is one of the most impressive ones I have ever seen. I really wanted to go to the top of the bell tower to get a picture of the city’s colorful buildings, but they charge about 10 bucks for it. I know it’s not a big deal, but this was the last day of my trip and cash flow had bottomed out! One of the servers at Cafe Babalu gave me a handy trick. In short, I did go to the bell tower and yes, I retained my $10 bill. That’s all I will say! 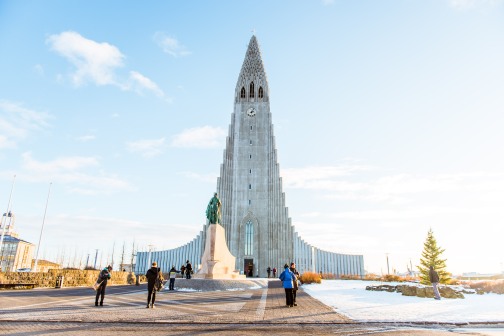 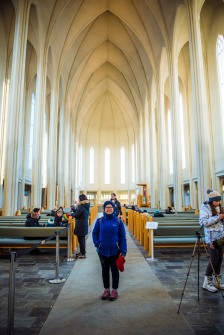 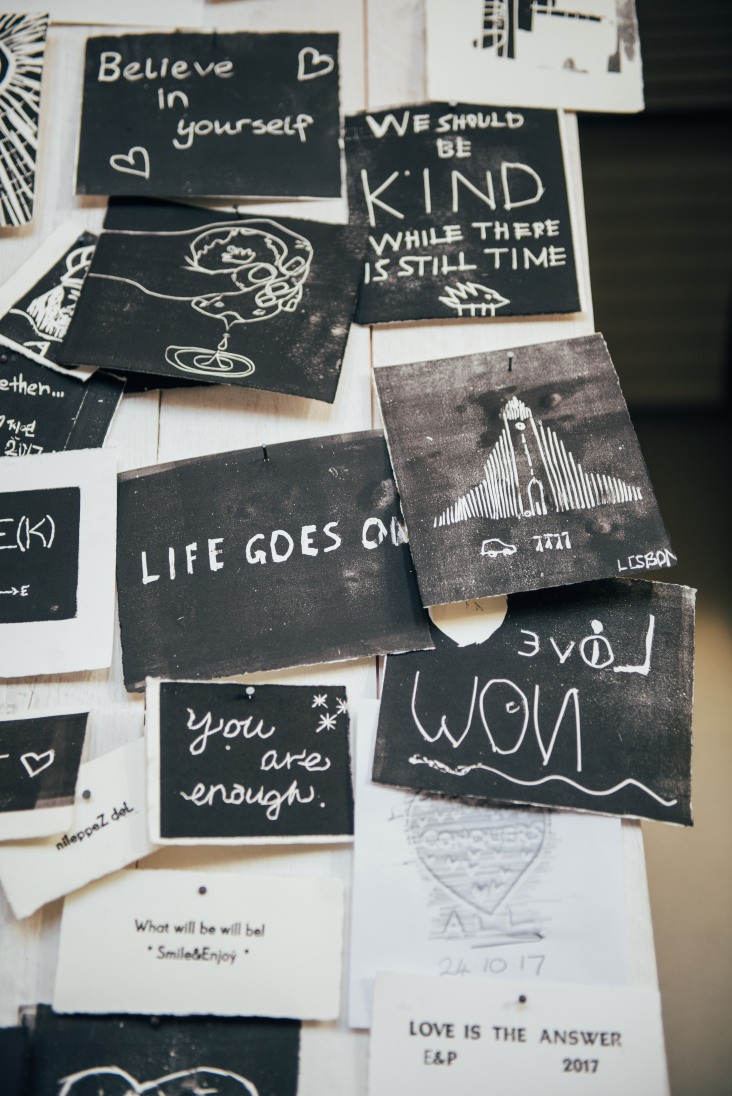 My favorite part of the church – these notes!

This city also has one of the nicest LP stores, called 12 Tonar. The owner not only helps you pick the right record, he also brings you a nice cup of espresso while you listen to the records! I am all for such out of turn kindness. 🙂 Stayed in some really good hostels as well. The hostel I stayed in had a gorgeous view of the city, but a bit of a walk from downtown. Heard some really good reviews of the Kex hostel, if you are headed that way. 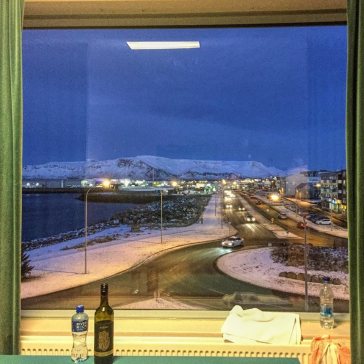 Last but not the least by far, was the visit to the Blue Lagoon. It is a man-made geothermal spa. This place often features on the 50 places you should visit before you die sort of a list. Expensive (which is true to everything in Iceland), super crowded ALL the time but worth every penny. Travelers usually choose to do this either the first thing when they land, or like me, the last thing on their way out. I think the latter is an excellent option. My flight was at 5 pm and I had the pre-sunrise 8 am slot. One can stay all day with any ticket, so it makes a lot of sense to get there as early as possible. And the sunrise while you are in the spa, is a huge bonus. Book your ticket before you reach Iceland, as this fills up really quickly. I spent half a day here. You get clay for skin cleansing, while you are soaking in the warm water and watching the sunrise. It is pretty easy to figure why hours go by really quickly here. By the way, you have to walk in a swimsuit in sub-zero temperature from the shower area to the actual spa. Those 10 seconds could be the longest 10 of your life! 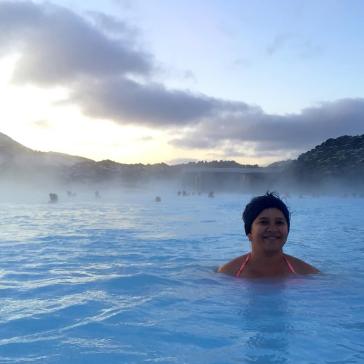 This post is the last of my posts from Iceland. First time traveling solo can be intimidating. Esp. for a person like me, who perpetually has someone watching over my back! Of course, there were moments where I missed familiar faces. But, as must be evident from my posts, loved every bit of it. There is a refreshing quality about doing your own thing at your own pace. Also, stating the obvious, this place is a photographer’s paradise! My camera was very pleased with the choice of destination. 🙂