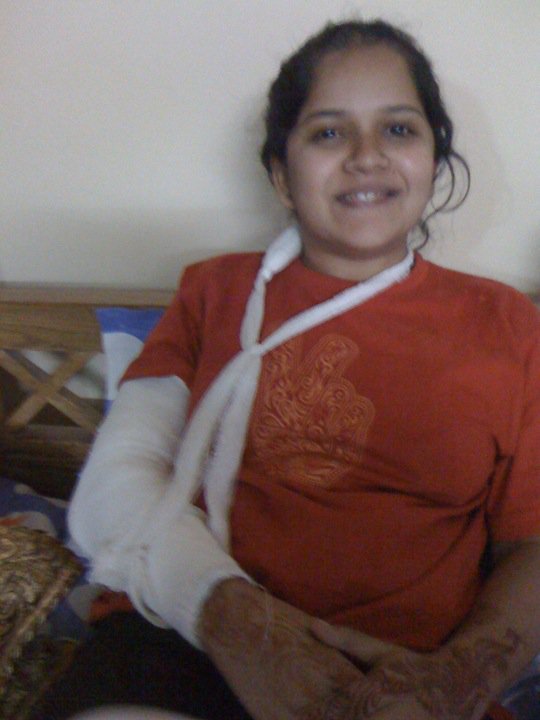 As a kid, when I learned to use my limbs in a somewhat coordinated fashion, I chose my left hand as my errands hand. So I picked and threw things, doodled on walls, hid important stuff, dropped and broke some other important stuff, waved an awkward bye…all of it with my left hand. Back then, it was a frowned upon habit. Right now it is cool to be left-handed. Some say it is a sign of intelligence! Imagine how close I came to being an intelligent geek..sigh! the opportunities we miss in life! 😀 Anyway..so Ma forced right-handedness on me. The devoted kid that I am, I moved from left-handedness to ambidexterity to right-handedness 🙂 The ease with which kids learn things..its quite amazing.

A couple of decades down the line (okay okay..add a few more years to that), am back to using my left hand for everything. I think it still nurses the hurt of being rejected years back, because it refuses to obey my commands! To think that your brain has control of your body! 😦 Slowly, now am moving towards ambidexterity again. Slow being the keyword here, to my utter frustration.

I thought infants do it all the time, how difficult can it be? Lie in bed. Eat food in bed. Vegetate day in and day out. Only to get up in times of necessity (okay, everything can’t be infant-like u know!). Now I know how difficult…and if your kid is cranky and crying, its only because he can’t walk out, soak up the sun and run into oblivion 😛

Since TV is the only source of entertainment, I have started watching everything. Thank god for my appetite for movies, no matter how trashy they are. These national geographic kinda channels show walruses and snakes at an alarming frequency. Are they going extinct by any chance? I also caught an episode of elephant humping on one of these channels. I mean really…why in god’s name should one be educated about how baby elephants are born! They should have an age rating for these channels! Very disturbing stuff.

I finally saw Star Trek and liked it. Realized I can’t watch Potter movies anymore. That hot men make movies watchable. That I can still watch Friends and go silly laughing over it (Can I be more addicted! 🙂 ). There are too many dating shows with freaks in them. And its not funny. I actually know the story of one of those Star Plus serials. I rate it better than the dating shows. And last but definitely not the least, after spending so many hours watching the match yest (u know..me and cricket..its a task!), the draw was UNFAIR! 😦

S came back to Chennai (mental high-five :)). We had plans u know. To make up for all the time lost. Travelling..partying..sigh! All the planning went down the drain with one swift projectile landing on Patna station amidst Bihari cries of concern. Goa’s on the cards though (\m/). I got parental approval too :P.

Footnote – You value when u lose. Be it activity in a limb or a dear one. So be nice. To yourself and those around you.